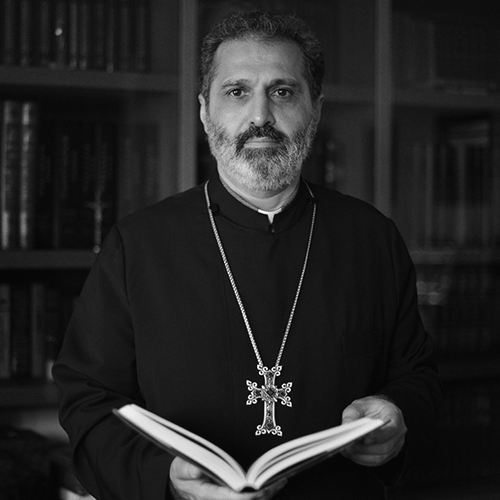 Fr. Mesrop Aramyan
Co-Founder, Member of the Board

Fr. Mesrop (baptismal name Matevos) Aramian is a graduate of the Physics-Mathematics Special School in Yerevan. He graduated from the Moscow Institute of Physics and Technology (MIPT) with a Master of Science degree in Engineering and Theoretical Physics in 1990. He successfully passed Lev Landau’s Theoretical Minimums in 1995-1996 and joined Vitaly Ginzburg’s theoretical physics group in 1998. He was ordained a priest of the Armenian Apostolic Church on May 28, 1991. In 1991, Fr. Mesrop Aramian founded “Gandzasar” Theological Center and heads it as Director and Editor-in-Chief. To date, the center has published over 80 publications. In 2002, he founded “Vem” spiritual-cultural radio station and has since been its Editor-in-Chief. In 2004, he created and currently heads “Vem Media Arts” film production studio, which has released 12 environmental documentaries. “Vem Media Arts” has also produced two television shows: “Catechism” and “Spiritual Discussions”. In 2006, in association with a group of friends, he established the “Ayb” Educational Foundation. In 2010, “Vem Media Arts” released the internationally acclaimed documentary feature film, “From Ararat to Zion”, which depicts the centuries-old Armenian presence in the Holy Land. Fr. Mesrop Aramian is the writer and producer of the film. In 2011, the “Ayb” Educational Foundation established the “Ayb” School. Fr. Mesrop Aramian is the Chairman of the Board of Trustees of the school and the author of the school’s educational curriculum. In 2013, he was appointed Adviser to the RA President. In 2014, “Vem Media Arts” studio released the film “The Book”. Fr. Mesrop Aramian is the creative producer and author of the film idea. In 2014, the RA Ministry of Education and Science and “Ayb” Educational Foundation, in cooperation with the University of Cambridge, and the UCL Institute of Education, launched a major educational initiative – the National Program for Educational Excellence (NPEE), based on “Ayb” School’s curriculum. Fr. Mesrop Aramian is the Program Director. In 2016, Fr. Mesrop Aramian was elected to the Board of Trustees of AUAC. Fr. Mesrop Aramian is married. Together with his spouse Irina, they raise seven children: Nerses, Mariam, Marta, Gayane, Mikayel, Sofia, and Hovhannes.